How big a lightning storm would we need to produce an observable signal on an exoplanet? What effect would such a storm have on the local atmosphere of the planet? These questions are explored in the paper by Gabriella Hodosán, Paul B. Rimmer and Christiane Helling for the mini-Neptune HAT-P-11b discovered by the Hungarian-made Automated Telescope Network (HATNet) in 2009.

Artist’s impression of an exoplanet like HAT-P-11 (Credit: NASA/JPL-Caltech).

HAT-P-11b is a Neptune-like exoplanet, orbiting the host star at a distance of 20 times shorter than the Earth-Sun distance. It is about 5 times bigger in size than Earth and 26 times more massive. It was discovered by the transit technique. In 2009 a group of scientists (Lecavelier des Etangs et al. 2013) observed the planet at a radio frequency band centred at 150 MHz. The observation was timed so that the planet would be observed before, during and after its occultation. They found a radio signal of ~4 milliJansky (mJy), which vanished as the planet passed behind its host star. The French team suggested that this signal could come from the planet, as it disappeared when the planet was behind the star. In 2010 they had a re-observed the planet, but could not find the signal this time. If the radio signal in 2009 was real, than its absence in 2010 suggests that it was produced by a transient event.

A storm with millions of lightning flashes

In our work (Hodosán, Rimmer and Helling 2016) we assumed that the signal detected in 2009 was real and was coming from the planet, as was suggested by the original paper. The question that raised our curiosity was: Could such a radio signal be produced by lightning in the planet’s atmosphere, and if yes, how many lightning flashes would be needed for it? In order to answer this question, we assumed that the basic lightning physics is the same on Earth, on the Solar System planets and on exoplanets. We previously used this assumption in Bailey et al. 2014 (see the blog entry here). Based on these assumptions we calculated that ~4×106 lightning flashes over a km2 in an hour should have happened during the observations of HAT-P-11b, over its whole disk. 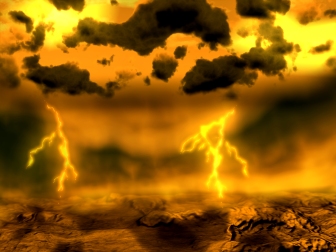 Is this enormous number of lightning flashes unreasonable? Our group (e.g. Lee et al. 2015, Helling et al. 2016) and others (e.g. Heng & Showman 2015) have shown that exoplanets orbiting really close to their host star have very dynamic atmospheres, meaning that they change continuously, producing clouds of different sizes all over the planet’s surface (e.g. our posts here and here). HAT-P-11b, being so close to the star, is likely to have a hugely dynamic atmosphere, which could allow the formation of immense thunderclouds, similar to the big red spot on Jupiter, focusing the lightning activity to a certain regime of the planetary surface, such as the face of the planet, which was observed in 2009.

Visible in the optical range?

Could we see such a huge storm with optical telescopes, in the visible range of the spectrum? Because a very large number of lightning flashes would be needed to produce the observed radio signal, they would produce a very high optical emission. We found that, depending on the energy emitted by the lightning flashes, the optical emission of this enormous thunderstorm would be comparable to that of the host star HAT-P-11, a bright K star, or would even outshine it. This is quite unlikely to happen, so we concluded that the radio signal was most probably not a result of lightning storms of HAT-P-11b.

Could we trace chemical signals of such a storm?

However, we were curious to find out how the local chemistry would change because of he large amount of lightning happening at a time. It is known from Earth that lightning has an effect on the chemistry of the atmosphere where it occurs. The process of discharging a lightning channel involves very high temperatures and the release of a large amount of energy. This results in chemical reactions that would not occur any other way. So-called „non-equilibrium” species are produced. These only stay in the atmosphere for a relatively short amount of time, then they turn into their equilibrium counterparts, unless the conditions became appropriate for their production. For example lightning on Earth produces NO2 in the atmosphere, which disappears after a while, unless more lightning occurs and produces more of this molecule.

In our study, we found that HCN would be the species to look for in the case of HAT-P-11b, if we want to observe lightning. Interestingly, we would not need the obtained number of lightning flashes to produce observable signatures, but orders of magnitude lower lightning activity would still be capable of creating observable quantities of HCN. These signatures would appear in the infrared band for 2-3 years after the occurrence of the storm, if lightning would have happened at a certain height of the atmosphere.

Since the press release (now showing previous, out-dated results) of the paper, several newsagents picked up the story. Some of them focused on our interpretation of an “unexplained radio signal” with a natural phenomenon (i.e. lightning) instead of aliens. This gave us the idea of comparing our study with previous ones looking for alien radio signals coming from space.

“Two possibilities exist: either we are alone in the Universe or we are not. Both are equally terrifying.” – Arthur C. Clarke 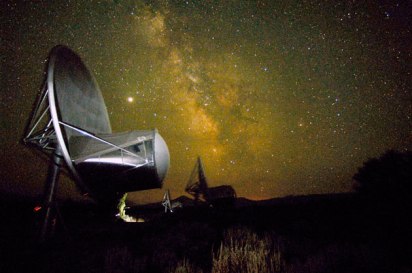 The question whether Earth is the only place in the Universe that hosts life on its surface has been around, unanswered, for thousands of years. We can go even further: are there other civilizations, intelligent races, out there? One of the first scientific papers on the question was written by G. Cocconi and P. Morrison, who wrote down the theory of ways of interstellar communication. Frank Drake started the so called “Project Ozma”, the first systematic search for alien signals with a radio telescope. His attempt was well designed, however, unsuccessful, such as all attempts have been so far. A year later, he organized a conference. While he was preparing for it, he came up with the idea of the famous Drake equation, which relates the number of intelligent civilization in our Galaxy to a series of factors. Since then several papers have been published about different theories of what the signatures could be of such intelligent civilizations, could we detect any of those signatures and why haven’t we detected any signs of them.

When looking for extraterrestrial intelligent life, we have to consider the signature most promising to look for. Radio waves propagate through space almost unimpeded and with the speed of light, making these wavelengths of the electromagnetic spectrum good candidates for ET signs. However, the electromagnetic spectrum contains a wide range of radio frequencies. Then where to look? The frequency band called “microwave window” is the favoured part of the spectrum, ranging from 1 GHz to 10 GHz. Physically this is the most quiet range of radio frequencies, meaning that this part is the less contaminated by natural radio emission. However, it is not free of it. But then how can we distinguish between a natural and non-natural radio emission? In theory, a radio signal produced by some kind of technology would be narrow-band. It would emit only in a very narrow range of frequencies. While natural phenomena would have broadband emission, emitting with a gradually increasing/decreasing power through out a wide range of frequencies.

Now, what about radio emission coming from lightning? Two main aspects of the technology-emitted radio signal and the lightning-caused radio signal are very different. Lightning emits in a broad spectral band, such as most of the natural phenomena we know of. The second main difference is the frequency at which it emits. While we expect other extraterrestrial civilizations to broadcast their signals at the GHz range, lightning emits mostly in the kHz up to a few hundred MHz frequency range. The radio signal from HAT-P-11b was observed in radio band centred at 150 MHz. This is much lower than what we would expect from an ET broadcast. However, this is the higher part of the radio band where lightning could still emit.

So in summary, the radio signal from HAT-P-11b is most probably not an alien signal, but either caused by a natural phenomenon, or simply instrumental noise. If we were the ones broadcasting radio signals towards other planets, we would not do it from a definitely uninhabitable planet, like the hot, Neptune-like HAT-P-11b. We would also not broadcast at frequencies, which would be difficult to observe due to natural noises, like at 150 MHz. 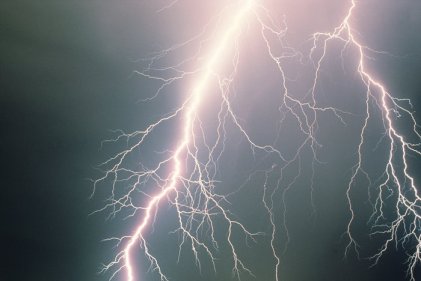 The conclusion is that there are various explanations, all from natural phenomena, which could cause a weak radio signal like the one observed by Lecavelier des Etangs et al. (2013) in 2009. However, most probably it is not lightning. We have to emphasize though, that lightning might be very different on an exoplanet from what we know in the Solar System. Exo-lightning may be much more energetic, producing more powerful signatures than has ever been observed in our Solar System. In which case, lower number of flashes, within the reasonable range, could produce observable signatures.

However, the importance of our study is that it showed that in the future, combined radio and infrared observations may lead to the first detection of lightning on an extrasolar planet, though this planet will most probably be closer to us than HAT-P-11b is. It also shows an original scenario for the explanation of radio emission observable on planets outside our Solar System.

If you have an opinion, please leave a comment below.

For more details check out the original paper on ADS:

The LEAP Group can be found here: